This chapter describes basic iDocs concepts you should know before scanning, importing or designing a new form. It includes the following sections:

Form Assistant is a dialog box that appears when launching iDocs. If you are new to iDocs, you might prefer to use the Form Assistant, which makes decision-making easy when processing a form. Later, you might choose to use the commands in the design toolbar or menu. See “iDocs Procedures,” for more information about using the commands.

This section contains the following topics:

There are several ways to open Form Assistant. 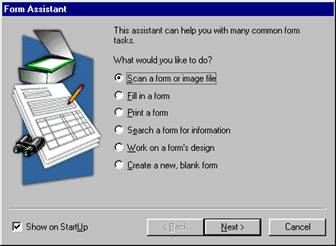 This section gives a brief description of each option in Form Assistant. Through a series of dialog boxes, Form Assistant easily steps you through the process of converting your form into an electronic form.

Scan a Form or Image File

Select Scan a form or image file to scan a paper form or import an image file and to determine how you will work with the form in iDocs.

Fill in a Form

Select Fill in a form to fill the currently open form or to open a form and fill it. See “Filling a Form,” for more information.

Select Print a form to print the currently open form or to open a form and print it.

Search a Form for Information

Work on a Form’s Design

Select Work on a form’s design to redesign the currently open form or to open a form in design view. See “Designing a Form,” for more information.

Form usage affects the way you can use a form once it is in iDocs. This section contains the following topics:

Decide how you will use a form in iDocs before you scan or import it: as a designed form, as an original form, or as a nondesigned form image as described below.

The following table provides the three usage options — designed, original, and nondesigned form — and recommendations for your choice.

Where to Select Form Usage Options

Different form usage options are available depending on whether you open Form Assistant or choose Scan Form… in the File menu.

You can choose to scan in or import either a designed form or an original form in Form Assistant.

This dialog box is one of several in Form Assistant and appears during the scanning or import process. See “Form Assistant Options” for more information.

You can choose to scan in or import either a designed form or a non-designed form in the Scan Form dialog box after choosing Scan Form… in the File menu. 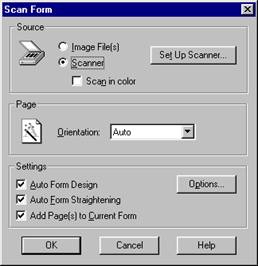 Choose Form Usage… in the View menu to change the way you can use a form. For example:

There is no original view for a form that you design yourself in iDocs.

Your form changes to reflect the selected option.

You can change the form usage from a non-designed form to a designed form. However, the form will be blank except for any fillable objects you may have added.

iDocs supports different language and cultural conventions. You can choose from 45 different locales in the International tab in the Options dialog box. A locale — as defined for iDocs usage — is a combination of a language and a region. The language you select for a particular region affects how your form displays currency, numbers, and dates.

To Select a Language for Your Form: 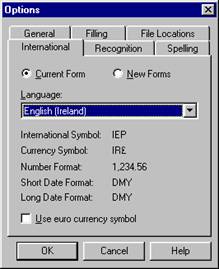 The Language drop-down list displays the language being used for the currently open form. If you have the International English, French, or German versions of iDocs or if you have multiple dictionaries, a dictionary in this language will also be used during a spell check.

You can only change the language for this option if you open the Options dialog box in design view.

The Language drop-down list displays the default language that will be used for the next form you open, scan, or import.
The language selected for a new form will also become the Current Form selection when that form opens in iDocs.

Only the List Separator option in these control panels affects how data is displayed in iDocs.

Below the Language selection, iDocs displays readouts: the international symbol for the selected language (which appears in the status bar); and currency, number, and date conventions specific to that language The readouts show:

If you select German (Austrian) as the Current Form language, the numbers 123456 entered in an appropriately defined currency field would display as öS 1.234,56.

If you select German (Liechtenstein) as the Current Form language, the numbers would display as CHF 1’234.56. Date

If you select English (United States) as the Current Form language, the date 2/ 5/96 entered in an appropriately defined date field would display as February 5, 1996.

If you select German (Standard) as the Current Form language, the date would display as 2. Mai 1996.

The New Form language selection appears in the Options dialog box, which is selected from the Scan Form dialog box.

You can select Allow Multiple Languages in the Scan Form dialog box (by first clicking Options… in this dialog box and then selecting the Recognition tab) for multiple-language forms. iDocs then recognizes all characters in all languages that it supports. The setting does not affect the language(s) selected for your form in the Options dialog box and vice versa.

When you select Allow Multiple Languages, iDocs turns off dictionaries during optical character recognition (OCR) so that all recognizable characters are allowed. If dictionaries were on, special characters such as umlauts might be discarded or questionable words in one language could be mistaken for words in another language.

Do not select Allow Multiple Languages for a single-language form. OCR may not be as efficient with dictionaries turned off.

Determine which language composes the majority of your form and select that as the New Forms language before scanning. To do so, click Options… in the Scan Form dialog box.