The printing preferences of the iDocs Driver should be set thus: 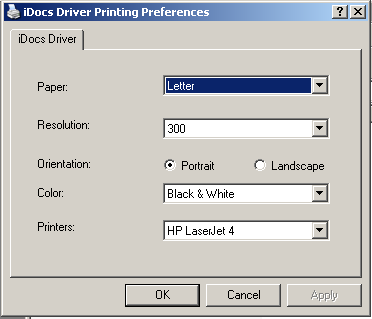 The LaserJet 4 printer driver resolution and page size, page orientation settings should match the iDocs Driver settings. In general it is not necessary to change these.

Note that one can use different printer drivers to create the overlay via the iDocs Driver, however the pcl generated must be compatible with the iDocs processor.

Font Size Changes When Uploading From iMap to System i

the fonts sizes are converted. The conversion is:

Thus a Univers font of 8 points on the pc will be uploaded as a System i font of 15 cpi.

To check that all is correct, do a test print. The font should appear on the paper the same size as it appears in the iMap left pane.

Issue: An issue has been reported that when printing to the iDocs Driver iMap is successfully invoked, but with the wrong overlay.

Cause: This is due to the driver's choice of file names – if the file already exists then the driver does not overwrite but invokes iMap on the pre-existing file, resulting in the wrong overlay in the left pane.

Resolution: 07/25/2007 a patched iDocs Driver can be downloaded separately for installation into iMap 1.6.46. This issue is believed fixed in that patch file. This iDocs Driver revision is included in all iMap releases 1.6.48 and later.

Issue: When opening a project file created under an earlier version of iMap, the project is not restored, the files do not open.

Cause: iMap version 1.6.46 reworked with internal format of the project file, the .fap file, and 1.6.46 is not compatible with project files from earlier versions.

Temporary workaround: Open the form, spool file and map file separately and then re-save the project file. The file will be written in the new format and will be usable henceforth. You do not have to remap the applicatin.

Resolution: No release of a separate fix is planned at this time.

iMap Installation Fails When Adding or Deleting the iDocs Driver

Cause: iDocs Driver installation, as a first step, attempts to delete any existing driver by that name so that it may install the latest driver. Should that delete fail, installation can not continue. Possible causes are:

User should consider the above possible causes, correct, then attempt the installation again.

Issue: Text at the right or bottom of multiple line mapped fields is mis-aligned; i.e.the location of text when printing or converting to pdf does not match the location when viewed in the iMap mapping function screen. Text at the left and top of the mapped field is properly positioned.

Issue: The spool file download fails for no apparent reason.

Cause: At least in some cases is due to an object conflict. iMap uses QGPL/TEMP as a workfile to store the *FCFC image of the spool file. If the user has a savefile by the same library/name iMap is unable to work with it.

Workaround: Delete any pre-existing file by that name.